The Other Marigold Capitol 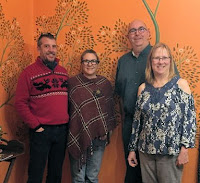 Fleming took a slight detour on a recent family vacation and met  the Winterville Mayor, and his wife, Cameron.  After an exchange of festival and community gifts, the Mayor gave Fleming and his wife Melanie, and granddaughter Lily, a tour of the city square and the festival grounds.

"He was very proud of his community, and excited about several upcoming projects," said Fleming.

Fleming and Ferrelle even discussed the possibility of community representatives attending each others festival again in the future.  The 2019 Winterville Marigold Festival is scheduled for Saturday, May 11th.

You can see a few more pictures from this event at:  https://photos.google.com/share/AF1QipOtbab1rRZP830pB6Jh-pQIlA7shfR-Uz_BM5f6N4PBXwJhn589WkRB8-OMD_yWaA?key=cGpqSlcwcUk0NXA1OVZKdXUxeTZ2MkNQaEdDeVlBhttps://photos.google.com/share/AF1QipOtbab1rRZP830pB6Jh-pQIlA7shfR-Uz_BM5f6N4PBXwJhn589WkRB8-OMD_yWaA?key=cGpqSlcwcUk0NXA1OVZKdXUxeTZ2MkNQaEdDeVlB