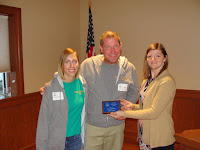 Sixty-Five chamber members and guests enjoyed a great time at the Avanti's Dome for the October Puttin' on Pekin breakfast.  Daryl Dagit won the early prize: $5 donated by Debbie Fornoff Interior Design and Draperies. It was presented to him by the breakfast emcee, Drew Lockwood from PNC Bank.  State Representative Mike Unes presented the chamber with a certificate of recognition from the Illinois  House of Representatives for the chamber's 125th anniversary.  Tom and Dori West, owners of West Dublin Pub received a Blue Ribbon Award for their work on their property at 507 Court Street.  The award was presented by Manda Brown from Perfectly Planned Events.  Jake Ista and Sue Nolan from Jake's Place received the Sunshine Award in recognition of the work they do with veterans, including free haircuts for veterans.  The award was presented by Debbie Fornoff.  Pekin Police Chief John Dossey was the breakfast speaker.  He spoke about Pekin's crime rate, K-9 program, and the work done by the Pekin Police Foundation.  You can see more pictures from this event at:
https://photos.app.goo.gl/dVBfcxFZJ2QDpThX7
Puttin' On Pekin