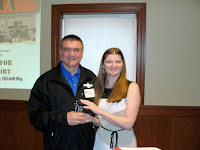 About 60 chamber members attended the April 21st Puttin' On Pekin breakfast held at the Avanti's Dome.  Dave Osborn (Trouble Free Heating & Cooling) won the Early Prize, while Deb Rathmel (KZBEME Fingerprinting) won the Late Prize.  Both prizes were presented by Manda Brown (Perfectly Planned Events) who served as the emcee.  Col. William P. Robertson from the Air National Guard based in Peoria was the program.  Of particular interest to the audience was the economic impact the ANG has on the Peoria region.  You can see a few more pictures from this event at:  https://goo.gl/photos/SyTifQUpMTck2gHZA
Puttin' On Pekin