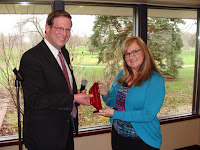 The Board of Directors of the Pekin Area Chamber of Commerce held their annual meeting on April 16 at the Pekin Country Club.  140 attendees representing 54 businesses and organizations enjoyed the reception and short business meeting.  The keynote speaker was Dr. Sheila Quirk-Bailey, President of Illinois Central College.

Three members of the Board of Directors completed their terms and were recognized for their service.  The retiring members were:  Josh Bradshaw, Advanced Medical Transport; Baylee Gambetti, Coldwell Banker - The Real Estate Group; and Brigitte Harper, Pekin Insurance.  Also recognized was Crystal Elliott, UnityPoint Health, who completed her service on the board as Treasurer, and John Franks, Peoria Limousine, who completed his service on the board as Past President.

The chamber’s executive director, Bill Fleming, spoke about the chamber’s legacy of leadership that began 125 years ago with five businessmen who filed articles of incorporation for the Citizen’s Improvement Association of Pekin.  Fleming drew parallels from that early group to today’s leadership in the chamber.

In her outgoing remarks, Saban made note of the financial challenges the chamber faced this past year.  She was proud of the adjustments the board and staff made and that the organization finished the year better than budgeted.

Saban also told the story of how she relocated to Pekin 20 years ago and the positive role the chamber played in that decision.

Kriegsman thanked the audience for their support of the chamber and was humbled by the opportunity to lead the organization.  Both his father and grandfather also served as president of the Pekin Area Chamber of Commerce.

Dr. Quirk-Bailey spoke about workforce development.  She began by sharing that only 40% of Illinois residents have some type of degree or credentials beyond high school.  Yet, by 2020 it is estimated that 70% of the jobs in Illinois, and 99% of all newly created jobs, will require credentials beyond high school.  She then outlined three key strategies that are being implemented in our region to close that skills gap.

The Pekin Area Chamber of Commerce has represented the business interests and promoted the growth of the Pekin area since 1893.

You can see more pictures from this event at:  https://photos.app.goo.gl/0DLJ6Ooas4esoZrt1
Annual Meeting