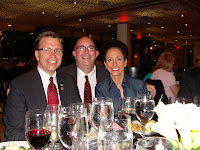 Participants enjoyed a tremendous opportunity to network with Central Illinois business and community leaders, Congressman Schock, and his guest, Congressman Schilling.  They also had time to network with each other at events held at the Swedish Embassy, the home of the Colombian Ambassador and Mount Vernon.  They toured the U.S. Capitol and visited the House and Senate floors, the Library of Congress, and Ford's Theater.
You can see more pictures from this event at http://picasaweb.google.com/PekinChamber
Chamber Announcements