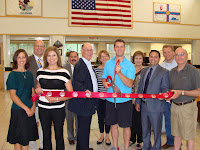 The Pekin Area Chamber of Commerce and the City of Pekin planned a groundbreaking on Friday, June 26 for a new assisted living and Alzheimer’s facility.  The event was to take place near the southeast corner of Windstar and South 14th Streets, but heavy rains forced the festivities into the Pekin City Council chambers.

This new assisted living facility will be called “The Villas of Holly Brook,” and “Reflections” will be for those with Alzheimer and other forms of dementia.  The facility will create between 40 and 50 jobs.

Pekin Mayor John McCabe praised the city staff, chamber of commerce, and the Economic Development Advisory Committee for working together to bring this facility to Pekin.

Leigh Ann Brown, Pekin's Economic Development Director, noted the continued demand for assisted care and senior housing, and the continued interest in Pekin by companies looking to serve that demographic.

The Phillips family, owners of Unique Homes in Charleston, Illinois will build the facility.  Chandler Phillips told the audience at City Hall the Pekin facility will be similar to facilities they've built in Morton and Washington.

You can see more pictures from this and other chamber events at:  http;//picasaweb.google.com/PekinChamber
Ribbon Cutting