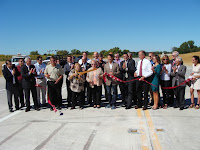 Community leaders and elected officials gathered for a ribbon cutting today to celebrate the opening of another section of Veterans Drive.  The 0.8 miles of new 5-lane road plus shoulders runs between Broadway and Sheridan.

This section of the road has been under construction for about the past year.  The $6.3 million extension was paid for with $4.8 million included in the last federal transportation bill, and the City of Pekin's local gasoline tax.  The federal transportation money was made possible with the efforts of then Senator Barack Obama and then Congressman Ray LaHood.

Pekin Mayor Laurie Barra acknowledged the leadership of the Pekin Area Chamber of Commerce Transportation Committee, previous City Councils, and the state and federal elected officials.  Congressman Aaron Schock praised the city for their foresight instituting a local gas tax which has paid for a large share of the project.

When completed Veterans Drive will begin at Route 29 on the south side of Pekin and run along the eastern portion of the community, connecting with a new interchange at I-474.  The City of Pekin recently awarded the contract for the section between Route 29 and Court Street.  Work is expected to begin in the next few weeks and be completed in October of 2015.

See more pictures from this event at:  http://picasaweb.google.com/PekinChamber