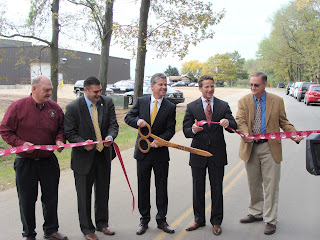 Several local dignitaries were present as Shady Lane was renamed Excel Way.  The recently upgraded road made it possible for Excel Foundry to expand their operations and create 100 new jobs.

The project involved several local units of government, including Cincinnati Township, Tazewell County, City of Pekin, the State of Illinois and the Economic Development Administration.  The Pekin Area Chamber of Commerce's Transportation Committee was also involved in the early discussions, bringing together several of the entitities for the initial meeting. 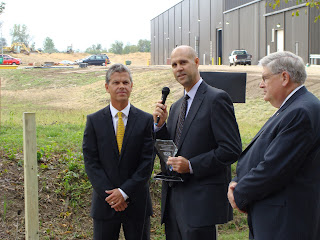 After the ribbon cutting, the EDC of Central Illinois recognized Excel Foundry & Machine with the 2012 Growth & Innovation Award for Tazewell County. The award is presented to a company that makes significant contributions to its community and demonstrates success and growth.

Earlier this year, Excel Foundry announced plans to invest $15 million in plant expansions and create 100 new manufacturing and engineering jobs in the Greater Peoria region.  The expansion also means over $2 million in road improvements near the facility.  Excel President and CEO Doug Parsons says this type of expansion doesn't happen without a lot of help from people throughout the region. "We thank the EDC for helping with the growth plans we have put in place. Excel is excited to be growing and we continue to look for more workers to support our growth."

You can see more pictures from this event at http://picasaweb.google.com/PekinChamber
Chamber Announcements