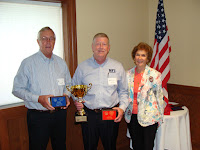 The August 11th Puttin' On Pekin breakfast was attended by 70 chamber members and their guests.  It was held at the Avanti's Dome Banquet Center.  Jay Hall from Excalibur Seasoning was the first to arrive, earning the early prize.  The Spotlight on Business was presented to Owen Miller on the 100th anniversary of Niemann Foods.  Tom Tow, the store director at Valu Check, received a Blue Ribbon Award for the recent remodeling at that store.  A second Blue Ribbon Award was presented to Nathan Schmidgall from Gro Up Gardening for his improvements to the building at 229 Court Street.  Brigitte Harper accepted the Sunshine award on behalf of Pekin Insurance in recognition of their employee volunteer program.  Terri Gambetti, owner of Leo's Art Studio, and Bill Fleming, Executive Director of the Pekin Area Chamber of Commerce, presented the program on Fourth Fridays.  Finally, Sue Nolan, a barber at  Jake's Place, was the last to arrive and received the late prize.  The early and late prizes were donated by Jeff Brooks from the Pekin Public Library.  You can see more pictures from this event at:  https://goo.gl/photos/iXYHSxzqxjJAtjhV9
Puttin' On Pekin