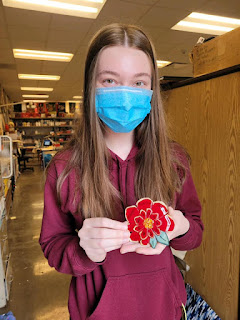 It’s not often hundreds of people from one city compete in a scavenger hunt for a single item. But for the City of Pekin, it’s an annual occurrence. For the past 43 years, the Pekin Marigold Festival has opened with the hunt for the Medallion: a small disc hidden within the community, found only by interpreting a series of mystic yet poetic clues.

This year’s Medallion is a fused glass piece, created by Pekin Community High School 2021 graduate Savanna Schultz.  It will be carefully camouflaged and protected in a bag or paper that could mislead hunters, then hidden by an unknown person in the community. Efforts are taken to secure the medallion against the elements and wildlife that may try to investigate the small package. Instructions for how to claim the medallion are within the package, including the secret phone number to contact the Cluemeister.

Over the years, the hunt has become a tradition for Pekin families and a hallmark of the close of summer. The Pekin Area Chamber of Commerce invites Pekin's amateur detectives and determined sleuths to get out in the community and participate in this free event that is fun for everyone.

How to play -
Watch for clues to be released at 12:00 p.m. daily Monday, August 30th through Saturday, September 4th. The next clue releases Labor Day at 6:30 a.m. The first three clues traditionally reflect a broad, general location within Pekin. Additional clues will reveal specific details on where to look within the general location. The clues are clever and will require hunters to use their knowledge of Pekin to decipher where the Medallion is hidden. Clues will continue to be released until the Medallion is found. Hunters can call 309-346-HUNT to have a real-time update of the status of the Medallion.

It is NOT hidden in any seasonal plantings or landscaping in Mineral Springs Park or elsewhere, on any golf course, inside the PCHS stadium’s fenced area, inside the Dragonland fenced area, inside any school facility, or on the property of the Pekin Archery Range or the UAW High rise.  While it might be hidden on school property, it will not be hidden in shrubs, bushes, or plantings immediately against the schools. The Medallion is not hidden within the landscaping at the Pekin Public Library or near the Pekin Federal Prison's perimeter fence.

Hunters do not need to dig up or climb up to find the Medallion. The chosen hiding place is always selected with safety and accessibility given the highest consideration.