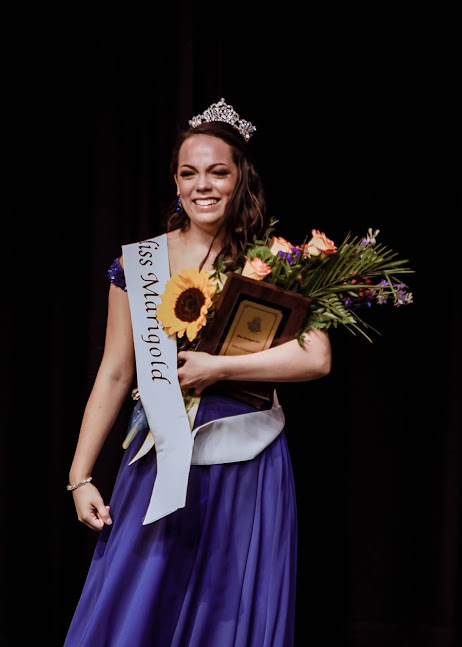 The Pekin Marigold Festival is proud to introduce Elisabeth Sandoval as the 45th reigning Queen to represent the community of Pekin over the next year.

Sandoval was overcome by emotion on the stage as the emcee announced the title of Miss Marigold.

“I spent thirteen years dreaming about this moment, and it turned out to be so much more than anything I could’ve ever imagined. But it’s only the beginning,” said Elisabeth Sandoval. “I couldn’t be more proud to represent and serve Pekin for the next year.”

Elisabeth Sandoval is a member of the National Honor Society and a National Scholarship recipient. She was invited to join the James Scholar Honors Program at the University of Illinois Champaign/Urbana where she will attend college this fall. Sandoval is the youngest graduate of the R. David Tebben Community Leadership Academy. During the pageant, Sandoval sang her own rendition of Billie Joel's "Vienna".

“The Miss Marigold pageant has always held such a special place in my heart,” says Shannon Sandoval. "I grew up attending from the time I was five years old, and when I was crowned I thought it couldn’t get any better. But now my daughter has also grown up with the pageant and watching her achieve her dream of being Miss Marigold is really just indescribable.”

More about the Miss Marigold Pageant- The Miss Marigold Pageant focuses on awarding scholarship money to savvy, goal oriented and aware young women from our community.  Contestants will compete in the areas of interview, community service, on-stage question, talent, and evening gown.  The young woman chosen to reign over this year's festival will receive a $2,500 scholarship and have an active role in a variety of community events throughout her year-long term.