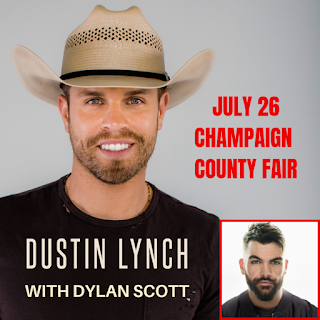 About Dylan Scott: It’s a long way from the outskirts of Bastrop, Louisiana, to the #1 spot at Country radio, each mile marked by passion, perseverance, and sweat. But rising star Dylan Scott has made the trek. “It’s like anything else, you have to work at it if you want it,” he says. “You can’t sit back and expect someone else to make it happen for you, you’ve gotta do it yourself.” With his romantic, PLATINUM certified #1 hit “My Girl,” and GOLD-certified Top 5 smash “Hooked,” Scott has certainly done that, paying his dues and transforming real-life experience into chart-topping success.
Tickets for the 2019 Champaign County Fair Concert will go on sale Friday February 1, 2019 at 10AM. Multiple ticket levels will be available. Get tickets at www.ChampaignCountyFair.cc or