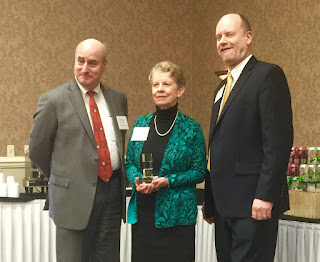 The long-time Executive Director of the Center for Prevention of Abuse was honored for her years of dedicated service on Friday. Martha Herm was the recipient of a 2016 Federal Home Loan Bank of Chicago Community First Award at a luncheon at the Double Tree Hotel in Bloomington.

Martha was nominated for the Pioneer Award by South Side Trust and Savings Bank. The Pioneer Award recognizes a career of achievements of an individual who has demonstrated an ongoing dedication to investing their time and improving their surrounding through community or economic development activities.

Martha Herm is a well-deserving recipient of this award.  She retired as Executive Director of The Center in May 2015 after 25 years of dedicated service.  During that time she worked to fulfill The Center’s mission of helping every woman, man and child live free from violence and abuse. Highlights of her leadership include:

·         The organization’s name was changed from Tri-County Women Strength to The Center for Prevention of Abuse
·         Services were added to help seniors and adults living with a disability who were victims of abuse
·         A Long-Term Care Ombudsman program was implemented to protect the rights and safety of residents in long-term care facilities
·         The domestic violence shelter at 720 Joan Court was expanded to centralize programming
·         The Carol House of Hope, a domestic violence shelter in Pekin, joined The Center
·         The annual Duck Race fundraiser was established
“I'm very honored to be chosen by the Federal Home Loan Bank of Chicago for their Pioneer Award,” said Herm.  “This recognition really needs to be shared with an amazing staff who were willing to join with me in trying new projects and programs which we believed, would help the people we served in a more effective way.  The award also needs to be shared with Board members, volunteers and the community in general, all of whom supported our innovations and expansions.”

Another initiative created during Martha’s time as Center Executive Director was the Next Step Transitional Housing Program. It is long-term housing for women and their children. They can make one of The Center’s apartments their home for up to two years.

“The Federal Home Loan Bank of Chicago, itself, helped us develop a transitional housing project which has been a most successful program.  We learned through that initiative that, with enough time and support, people can fundamentally change their lives for the better,” said Herm.

The award came with a $10,000 check from Federal Home Loan Bank of Chicago to the not-for-profit of Martha’s choice.  She designated those funds to The Center for Prevention of Abuse.
Member Announcement