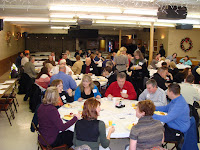 Nearly 100 people attended the Puttin On Pekin breakfast this morning at the Knights of Columbus Hall. Jake Ista (Jake's Place) won the early prize, while Melanie Long (McDaniels Marketing Communications) earned a lump of coal with the late prize. The Salvation Army Brass Ensemble entertained the crowd with Christmas music. There were 7 grand prize winners in the big year-end door prize drawing. Erik Reader, Drew Lockwood, Ralph Mickley, Beau Austin, Dr. Timm Schwartz, Terry Finnegan, and Leslie Cameron each won a basket of prizes worth about $300. There were 8 names drawn from people who weren't in attendance, including one who left the breakfast early! You had to be present to win.  You can see more pictures from this and other chamber events at:  http://picasaweb.google.com/PekinChamber
Puttin' On Pekin