Meet John "Jack" Hall, resident of Cedarhurst Living on South 14th Street in Pekin. Jack is veteran of the 298th Army Band and the Fifth Army Band at Ft Sheridan. Recruited by the Armed Forces for his music ability, Jack had no idea how a childhood hobby would come to shape his life. 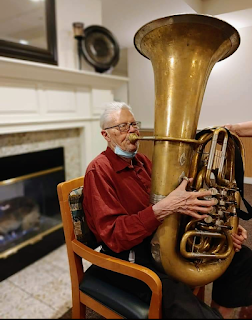 Jack began learning piano in junior high school and somewhere along the way picked up the sousaphone
(tuba) and string bass. Graduating Pekin Community High School in 1953, Jack didn’t desire a career in music. He would later obtain a Bachelor of Science in Business Administration from Bradley University and enjoy a career with Caterpillar, Inc. But as fate would have it, music brought Jack his first world experiences.

The 298th Army Band arrived in Berlin in July 1945 to build German American relations post WWII, with Jack joining the 56-musician band a few years later. Also known as part of the Berlin Brigade, the band enjoyed one of the warmest local community relations of any command in the Army.

A conversational knowledge of German learned just weeks before arriving to Germany played to Jack’s favor, and on his first day in Berlin with the 298th Army Band Jack met his future wife: Margarete Glatzel. He hardly spoke German and Margarete had next to no English-speaking skills. Yet, Jack and Margarete married a few years later and traveled back to the United States together.

Jack Hall will depart Thursday, June 2nd on the Greater Peoria Honor Flight. Through his service in the Army Band, Jack provided music throughout the spectrum of military operations to instill in our soldiers the will to fight and win, foster the support of citizens, and promote our national interests at home and abroad. The Pekin Area Chamber of Commerce thanks Jack Hall for his service to our country.