Pepsi Marigold Medallion has been found!

When Carrie Smith and sister Stacey Hayes woke up the morning of Labor Day, they were hopeful. But, the women had no idea they would make history, with years of hard work sleuthing paying off. At 7:11 a.m., little more than an hour after Clue 7 released, the sisters made their discovery at Pekin’s Riverfront Park: the first year in 43 years the Pepsi Marigold Medallion was hidden at this location.

Cluemeister Gary Gillis said he had never hidden the Pepsi Marigold Medallion in this area before because of a lack of landmarks that could mislead hunters. The area was essentially too unique. After seeing the Riverway Road sign just adjacent to the Spalshpad, the Cluemeister felt inspired. Key components directing hunters to the location included phrases such as a “panoply of sounds” and the stanza “Look for a 2006 winner of a Presidential Freedom award. Find two books of an historian’s work. You'll be in the thick of your reward.”

Sisters Carrie and Stacey have been avid hunters through the years, coming close to discovering the Medallion many times. Their late grandfather originally introduced them to the hunt years ago. Carrie and Stacey were elated to make their discovery and become part of Pekin’s history. The hunters will ride in the Marigold Festival Parade this Saturday at 10:00 a.m., and keep the $1500 cash prize from Pepsi.

The Pepsi Marigold Medallion Hunt is an annually tradition, part of the Pekin Marigold Festival honoring the life and legacy of Senator Everett McKinley Dirksen. Seven clues released this year Monday, August 30th through Saturday, September 4th, with the last clue released 6:00 a.m. on Labor Day. The Pekin Area Chamber of Commerce and Pekin Marigold Festival invite the Central Illinois community to read this year’s clue interpretations on the their blog and social medias and plan to participate in next year’s hunt! 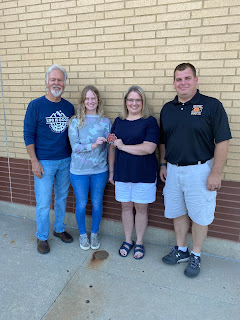