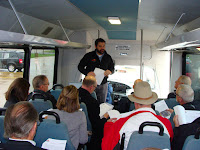 The bus was provided by Peoria Limousine.  The 2-hour tour concluded with lunch at Avanti's Ristorante provided by Hanson Professional Services.

You can see a few more pictures from this events at:  http://picasaweb.google.com/PekinChamber
Chamber Announcements